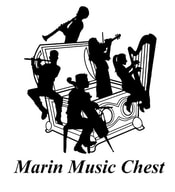 Maude Fay Symington
The Golden Gate Bridge was still in the planning stage. Highway 101 was a paved road with just two lanes, the great Depression was in full swing and, except for the Sausalito and San Rafael ferries and rail service from Sausalito north, Marin County was culturally and geographically an isolated but wonderful place to live.

In 1933, a retired, well-known Wagnerian soprano, Maude Fay Symington, became aware that Marin County needed a way to bring outstanding musical talent to its residents. That summer, she gathered a number of like-minded friends and they founded the Marin Music Chest which received a franchise from the State of California later that year. Their mission was "to provide the best music, for the greatest number of people, at the least cost." To become a member of the Marin Music Chest, individuals could contribute whatever they could afford, be it 5 cents or hundreds of dollars. Members received a card which entitled them to attend each concert for 25 cents. Non-members paid three dollars per concert.

The Music Chest's first concert in 1934, featured Nelson Eddy as soloist. The performance was held in Forest Meadows on the grounds of Dominican College in San Rafael. Following the concert, autograph seekers were so enthusiastic they had to be held back from the stage by the police. Shortly after their initial concert, the membership of the Music Chest grew to 9,000, one fifth the population of Marin County at that time. After more than 40 years of bringing the world's greatest musical artists to Marin County, the Marin Music Chest ended its role as concert presenter and changed its primary mission to that of providing encouragement and scholarships to outstanding young musical talent of Marin County. 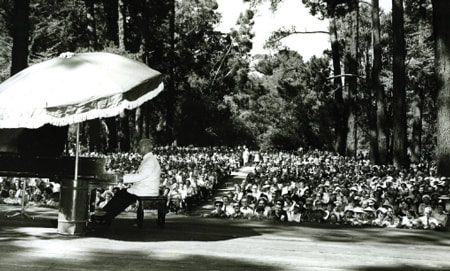 Concert at Forest Meadows.
In 1934, the Music Chest awarded its first scholarships to talented, young music students. Since then, over 500 scholarships, with a total value of over one million dollars have been awarded! Most of the money for these scholarships has been raised through the efforts of the Music Chest's volunteer board and its friends and supporters, supplemented with estate grants and annuities. Thanks to the vision of Maude Fay Symington and the untiring efforts of large numbers of past and present volunteers, the work of the Marin Music Chest has played and will continue to play an important role in the development of the cultural fabric of Marin County and beyond.

​See our Past Recipients Spotlight for the names of some of the Music Chest winners who have gone on to important careers in music and dance locally, nationally and internationally.